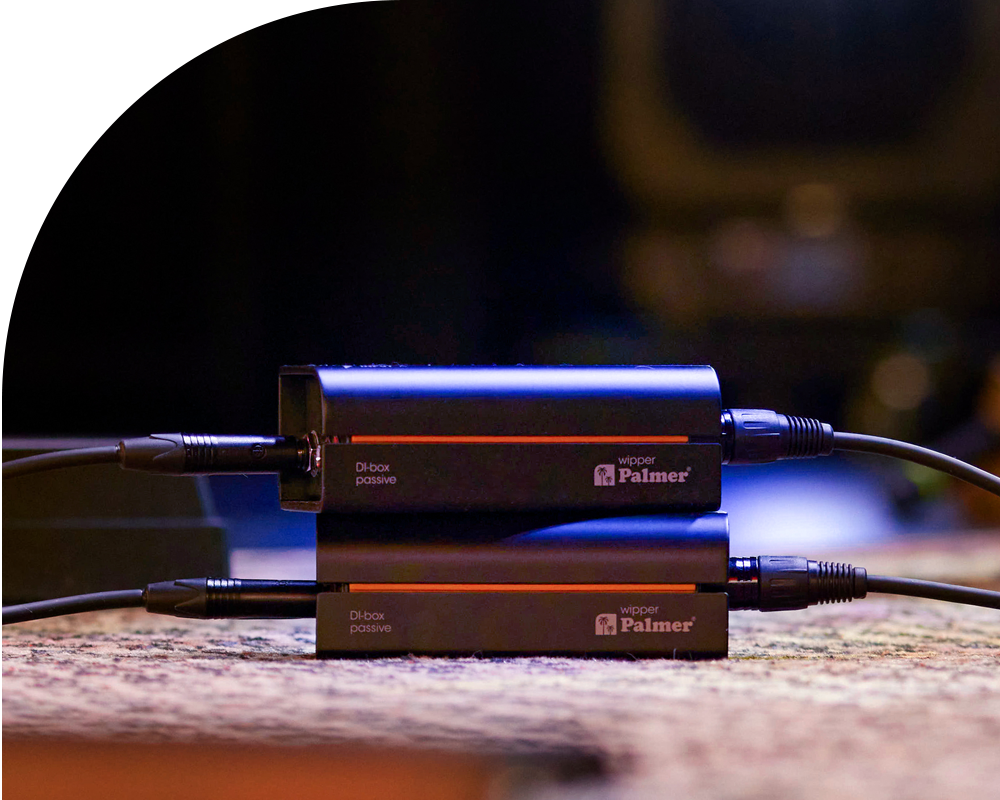 Their primary purpose is to convert unbalanced or high-impedance instrument signals into a signal suitable for direct connection to the microphone input of a mixing console - whether live on stage or in the recording studio.

An unbalanced or high-impedance instrument signal is transmitted from the electromagnetic pickup of electric guitars, electric basses and electric pianos and even some vintage synthesizers.

When do I need one?

The simplest way to give you a clear picture of when you would need one is to look at how they developed.

However, since the electrical signal from a music instrument is not necessarily compatible with the output signal from a microphone, a special signal converter box was needed. This is where the DI box came into play, which is still needed in most cases today.

In other words, if you want to go directly from the instrument to the mixing console or audio interface, you will need a DI box.

What is a DI-Box (actually) doing?

Do I need a Passive or Active DI-Box?

The quick answer: It all comes down to the power of the source! Choosing an active or passive one for your instrument depends on the output level of the instrument itself.

Features to look for

Whilst DI boxes can greatly reduce or eliminate the amount of external noise that builds up on unbalanced signals at the instrument, even balanced audio devices are susceptible to ground loops.

By using a switchable ground lift, you can disconnect pin 1 on the XLR jack of the DI box, preventing current from flowing between the DI and the mic preamp along the shield, breaking the ground loop and eliminating the noise.

Certain DI boxes have a switchable gain attenuator, known as a pad, to prevent the circuit from being overloaded by high levels.

This circuit reduces the input signal by a fixed amount (-15 dB and -20 dB are common) to reduce the high-level output of active pickups and unbalanced line-level devices such as keyboards and other electronic and digital instruments.

A "Thru" ( for pass-through) or bypass divides the source instrument level input signal to a dedicated 1/4″ output. This allows the raw signal to be sent to an amplifier on the stage as well as to the PA via the balanced XLR output. This is particularly useful for bassists, as it allows them to use an amplifier only for on-stage monitoring and drastically reduce stage volume. The outputs can be completely passive or buffered on some active DIs to support longer cable runs as well as effects pedal lines.

Other types of DI Boxes

Using a microphone to record, the sound which comes out of the speaker will always sound slightly different because the positioning, angle or surrounding are most likely not always the same.

This is where the Speaker Simulation DI-Box comes into play.

A Speaker Simulation DI-Box is a device that is used to connect a guitar amplifier to a mixing console or an audio interface, without the need for a microphone. This way you’ll be able to get a dry simulated speaker sound without any mic bleed of other instruments, whether you play on stage or in the studio.

It is also helpful to get a guitar sound which cuts through the mix.

A re-amplification box is simply a DI box that has been wired backwards. Some might call it a reversed DI-Box. The input is on the XLR side and the output is on the 1/4" side.

This is useful in situations where you want to send a balanced signal from a mixer to an unbalanced input on an amplifier or other device.

In other words, this is useful when you want to re-amp and reshape your recorded sound.